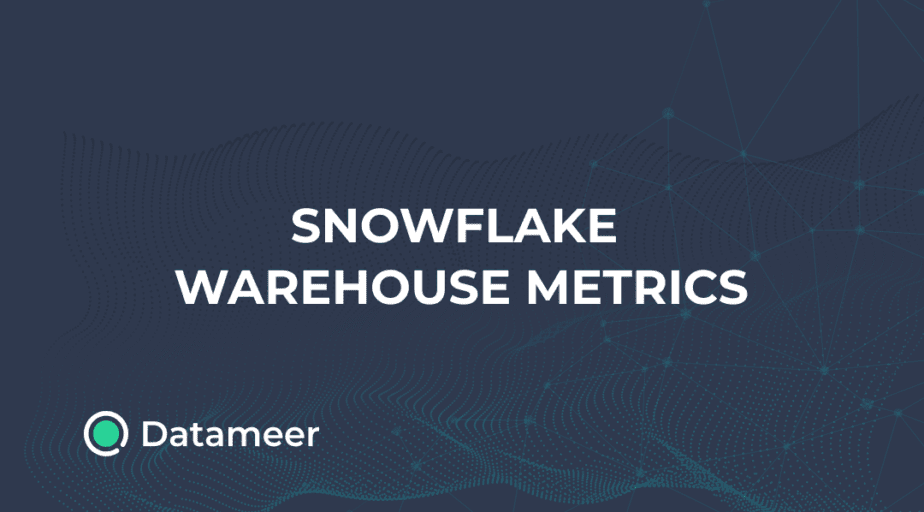 TL;DR: We observed decreased performance of our Snowflake warehouses and wanted to implement data governance. Based on Snowflake’s built-in QUERY_HISTORY, we compute the warehouse metrics, feasibility, availability, concurrency, and response time. We assessed potential reasons for such drops in performance, and we were able to evaluate options to react.

Recently, we organized a bug bash in our company to put Datameer through its paces. Occasionally, some Snowflake calls showed unexpectedly long waiting times and timeouts, which led to undesirable behavior of our software.

The WAREHOUSE_LOAD_HISTORY showed queued queries indicating an overloaded warehouse. Consequently, we revised how our app communicates with Snowflake to avoid undesirable behavior in the future. Nevertheless, warehouses can overload, and we wanted to quantify such events enabling us to choose an appropriate warehouse size or even consider a multi-cluster warehouse. A well-directed decision can save money and keep our Snowflake users happy simultaneously.

When exploring the WAREHOUSE_LOAD_HISTORY, we also observed blocked queries in our account, another indicator of degraded performance. We looked into the QUERY_HISTORY to understand who was affected. Our investigations revealed that the blocked queries came from testing our QA team. We wanted to know if we needed to change some testing approaches to ensure that blocked queries do not defer or hamper our QA processes.

In this blog post, we measure the impact of degraded performance on query level to enable data-driven decisions on questions like:

Availability, concurrency, and response time (s) within 90 minutes of the LOAD_WH warehouse. Before and after the bug-bash we see business as usual. Still, during bug-bash, the availability drops from 100% to 25%, the concurrency increases from 50% to more than 900% (i.e.,> 70 concurrent queries), and the response times increase from 45 ms to 270 s.

During the bug-bash, we used the LOAD_WH warehouse (size was X-Small), and the availability dropped to 25%, indicating that only every fourth query could be processed at a time. Hence, the warehouse accumulated more than 50 queued queries, and the mean response time increased to nearly five minutes, which is way too high for an interactive usage of our product. We conclude that we need at least a Medium sized warehouse for such a scenario the next time.

Feasibility and response time (ms) within one month for the QA_ONLY_WH warehouse.

We distinguish degraded performance due to warehouse overload and degraded performance due to blocked queries. A warehouse becomes overloaded when it receives more jobs than it can process, which results in queued queries. Query blocking can also be considered some kind of queuing, but the root cause is different. Query execution is blocked when another query locks an object for an update. A query that attempts to update the same object simultaneously is blocked until the other query releases the lock (see simple example below).

We want to separately assess degraded performance due to an overloaded warehouse from degraded performance due to blocked queries. The issue of blocked queries is not necessarily specific to a single warehouse, and we wanted to measure to which degree queries in different warehouses are affected by that. Also, the way of solving this is different. In case of an overloaded warehouse, we can increase the warehouse size or re-distribute the workload to other warehouses; for blocked queries, we have to adjust the way our updating processes are working instead.

We utilize the warehouse metrics availability, feasibility, concurrency, and response time to gauge the degraded performance of our warehouse and Snowflake data governance as follows.

The availability metric captures to which degree a warehouse is affected by queued queries (i.e., warehouse repair, provisioning, and overload), and values range from zero (everything is queued) to one hundred (no queuing at all). The availability should be close to 100%. Otherwise, your applications might crash, e.g., because certain routines might time out after 30s.

The feasibility metric captures to which degree a warehouse is affected by blocked queries, and values range from zero (everything is blocked) to one hundred (no blocking at all). If this metric is below 100%, you may want to check which processes are updating a common Snowflake resource and whether a better strategy can lead to block-free update cycles.

The concurrency metric reflects the number of concurrent queries of a warehouse relative to the MAX_CONCURRENCY_LEVEL warehouse parameter, and values range from zero (no queries) through one hundred (optimal warehouse utilization) to open end (warehouse overload with poor response times).

The response time metric specifies the mean overall time for query completion and depends not only on queuing or blocking of queries but also on the execution time. The response time should be quick enough so that you can work with Snowflake interactively and your consumers do not face timeouts.

We wanted to manage our warehouse, and by setting up our Snowflake data governance, using the warehouse metrics availability, feasibility, concurrency, and response time, we have KPIs to assess the impact of degraded performance due to warehouse overload and blocked queries. We can anticipate the impact of future activities based on the impact of events from the past. We will introduce additional warehouse metrics for further use cases, such as decreased warehouse cost.

Contact us today to give feedback, or get in touch with us!

How Can Embedded Analytics Unlock the Potential of Data A...