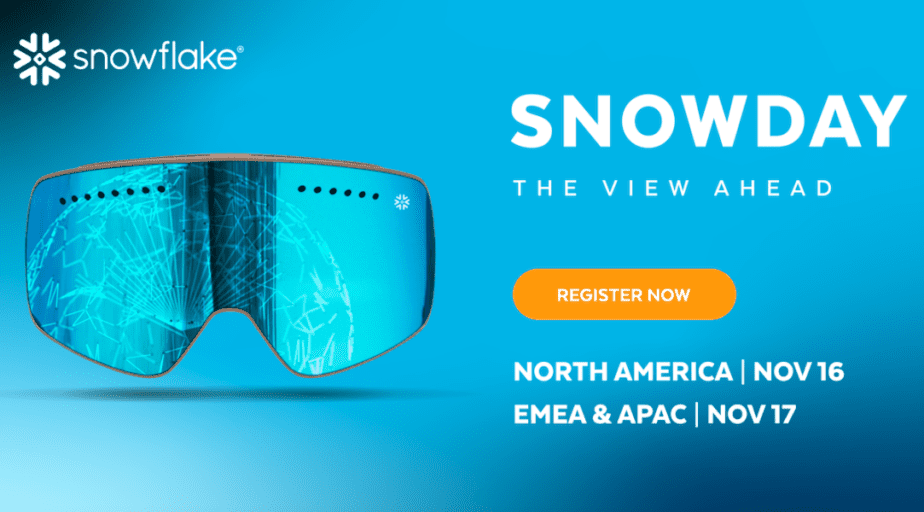 What’s new in the Snowflake Snowpark from Snowdays

At Snowday earlier this week, Snowflake announced a number of new features, with each being interactively demonstrated, and interviewed a few key customers.  Among the new capabilities were the following:

When Snowpark was first introduced, it provided a Dataframe API that allowed teams to access data in Snowflake from their favorite languages and notebooks.  Snowpark can be used by data and analytics teams for everyday data querying, to create data engineering pipelines, and now for data science usage.

When Snowpark was first introduced a few months ago, the intent was for Snowpark to support a variety of languages, including SQL, Java, Scala, and Python.  What Snowflake announced was that Python, Java, and Scala were available in private or public preview.  This allows teams with diverse programming skills across the most popular languages to use Snowpark.

With the Java and Scala support, teams can use Scala via Snowpark on the client-side and use Java for table functions (UDFs), stored procedures, and processing unstructured files.  In addition, the new Snowpark Java API is under development and will be released in the future.  Execution is performed within a native Java engine embedded within Snowflake.

The new Python support within Snowpark also involves a native Python runtime engine embedded within Snowflake.  The Python dataframe APIs are similar to PySpark.  Python code is pushed down into Snowflake, where dataframe functions are converted into Snowflake SQL, then optimally executed.  The integrated Python engine enables complete and common security, governance, and management from within Snowflake.

In addition, Snowflake announced integration with Anaconda’s Python management services and hundreds of open-source Python libraries.  This facilitates library and package management directly inside of the integrated Snowflake Python engine.

The key win of these announcements is the ability for teams with diverse programming language skills to work with and collaborate around Snowflake.  The data used and consumed remains inside of Snowflake (it doesn’t need to be replicated or moved) with saves time and keeps the data secured and governed from one place – Snowflake.  It also lets team members use their most familiar programming models and skills.

Snowflake Snowdays also introduced a number of new enhancements targeting data engineering and the building and management of data pipelines.  This includes:

All of these enhancements help improve the efficiency and operation of data pipelines within Snowflake to lower operating costs.

The most important aspect of these announcements is the Java, Scala, and Python support within Snowpark.  Snowflake’s objective with this announcement was to support a more diverse programming audience to Snowpark and the Snowflake Data Cloud platform.  The new capabilities do achieve that objective.

However, the two audiences that continue to be left out of the Snowflake picture are the non-programmers and programmers that would prefer to take a low- or no-code approach to data transformation and modeling.  In addition, the highly programmatic approach of Snowpark limits the collaboration between programmatic data teams and lower-coding analytics teams.

This is where Datameer comes into play.  The Datameer solution is the industry’s first data transformation platform that offers a unique multi-persona SQL-code/Low-code/No-code toolset that lets anyone in the organization, regardless of technical skill levels, work with data.  Datameer gives data engineers the control they require and analysts the ability to support a collaborative data modeling and transformation process.  With Datameer, anyone in the organization can model and transform data.

In addition, the Datameer solution enables organizations to transform and model data directly in Snowflake.  All transformation models are contained, managed, and executed within Snowflake.  This lets you use the flexibility and dynamic scalability Snowflake offers, maintains a single repository for data and data models, eliminates data movement, and keeps your data safe and secure within your Snowflake platform.

The Datameer SaaS data transformation solution for Snowflake is available today.  Organizations are invited to schedule a personalized private preview to get a more detailed look at this unique new solution.

Transform & Model Data in Snowflake With No Code

How to Transform Your Data in Snowflake: Part 1

How to Transform Your Data in Snowflake The data modeling world is constantly evolving as new tec...

How to Transform Your Data in Snowflake: Part 2

Optimize your data models in Snowflake In How to Transform Data in Snowflake: Part 1, we discusse...

A Review of Dbt (Data Build Tool) and the Top M...

A Review of Dbt and the Top Missing Features Dbt has become a market darling for data transformat...